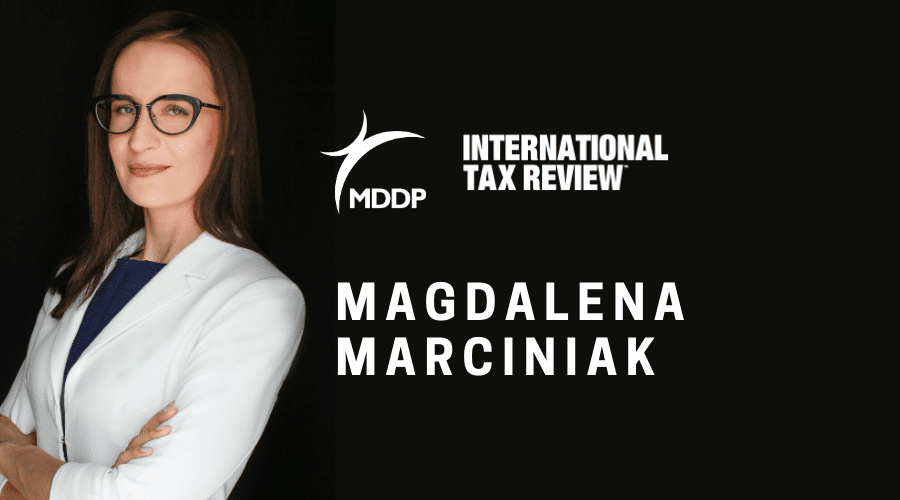 We are pleased to announce that Magdalena Marciniak, Partner and Head of the Transfer Pricing Practice is the only Polish expert nominated by the prestigious International Tax Review as Transfer Pricing Practice Leader of the Year in the European Tax Awards 2020 contest! In addition to Magda, transfer pricing specialists from the Netherlands, United Arab Emirates and Italy are nominated in this category.

What is additionally noteworthy and makes us particularly happy is the fact that Magda is the only nominated expert from Central Europe.

In addition to Magda Marciniak’s nomination, just like every year, our entire Transfer Pricing Practice has been nominated for the award in the Poland Transfer Pricing Firm of the Year category. The nomination in this contest is a huge distinction since it proves the constantly high quality of our advisory services and of the projects we implement! The winners will be announced on 21st May.

European Tax Awardsare an international ranking of tax consulting firms held by the prestigious International Tax Review since 2005. It involves the best tax firms in the world. MDDP Transfer Pricing Team, led of Renata Dłuska, has received the title of Poland Transfer Pricing Firm of the Year four times in history (in 2006, 2008, 2012 and 2013). Moreover, MDDP has won the title of Poland Tax Firm of the Year twice (2013 and 2018).

E-mailLinkedin
WIĘCEJ WIEDZY
OUR EXPERTISE
Do you need a consultation?
Go to Top
Cookies are used on our website to detect user preferences and help in the provision of services. Please choose whether the website should use only the necessary cookies or may also use other types of cookies referred to in the Cookie Policy. These settings may be changed at any time. Please be advised that this may, however, cause some features cease to be available. In order to obtain information on deleting cookies, please use the help function of the browsers used.HIDEMORE INFO