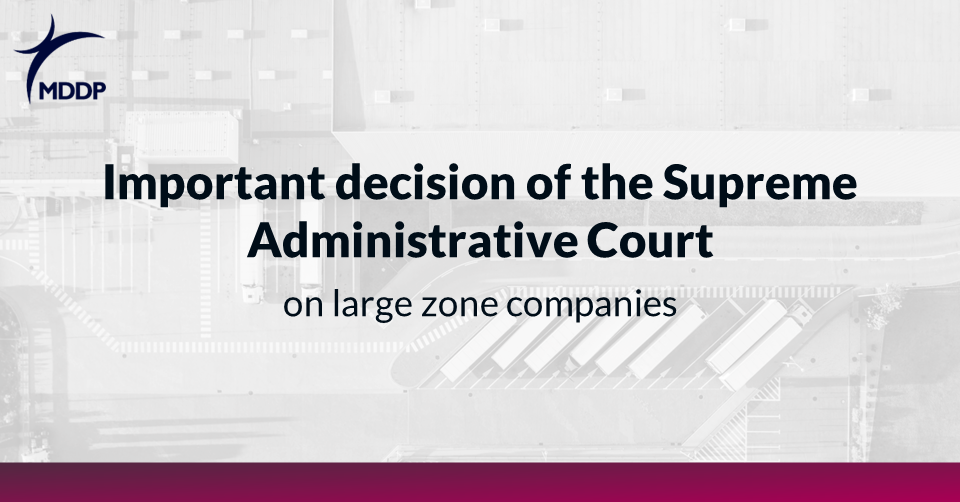 On 19 July 2022, a judgment was issued by the Supreme Administrative Court (Naczelny Sąd Administracyjny – NSA), and earlier by the Provincial Administrative Court (Wojewódzki Sąd Administracyjny – WSA in Rzeszów, confirming the right of large entrepreneurs operating in special economic zones based on converted permits issued before 1 January 2001 to apply state aid (tax exemption) until the end of the period for which the zone was established, and not for the duration of the original permit.

Thus, the NSA confirmed the possibility of equalising the rights of large entrepreneurs who obtained a zone permit before 1 January 2001 and those who obtained their permit after that date.

The proceedings concerned an individual interpretation in which the tax authority claimed that taxpayers who have the status of large entrepreneurs and obtained their zone permit before 1 January 2021 (i.e., the date on which the Act on Special Economic Zones was amended), may use the state aid granted to them only within the timeframe provided for in their permit. According to the tax authority, the subsequent amendments to the SEZ Act, based on which:

do not affect the timeframe for applying the tax exemption available to these entrepreneurs.

According to the tax authority, applying for permit conversion (under Article 6 of the amended SEZ Act of 2003) does not mean that all the new rules resulting from the amended SEZ Act, including the change (extension) of the deadline for using public aid (tax exemption), apply to these entrepreneurs.

This interpretation was rejected by both the WSA in Rzeszów (Judgment of 2 June 2020, Case No.: I SA/Rz 233/20) and the NSA, which agreed with the taxpayer who had argued that:

This is yet another important judgement on this issue, not only for the taxpayer concerned but also for all the SEZ enterprises that have incurred high capital expenditures but have not yet managed to account for the state aid for which they are eligible.

The case was handled by MDDP team consisting of: Monika Dziedzic, Magdalena Zamoyska and Monika Grobelska.

E-mailLinkedin
PUBLICATIONS
Do you need a consultation?
Go to Top