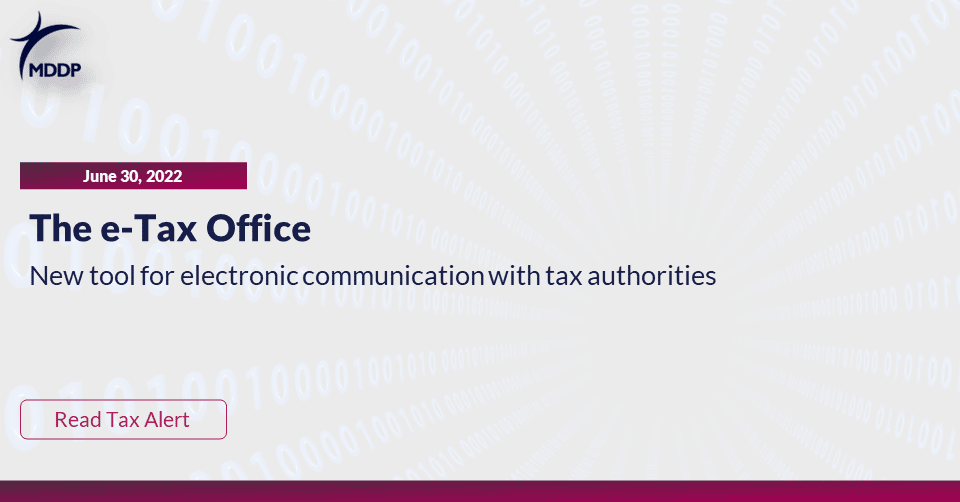 On 7 July 2022, the Act amending certain acts in order to automate the handling of issues by the National Revenue Administration (KAS) is to come into force. The new regulations are intended to automate and streamline the handling of issues with the use of ICT systems. Above all, this is to be achieved by introducing a new tool for electronic communication with the National Revenue Administration – the e-Tax Office system.

What is the current situation?

Up until now, taxpayers have mostly used the Tax Portal for electronic communication with the tax authorities. Among other things, the portal enables taxpayers, to fill in tax returns using interactive forms or to use verification tools (e.g. verification of the taxpayer’s VAT status, verification of NIP Tax Identification Number number). In addition, individuals very often use the “Your e-PIT” [“Twój e-PIT”] service, through which they can file their PIT returns, obtain information about their current data, submitted documents, payment history or issued fines.

Both tools are used for unilateral electronic communication between the taxpayer and the tax administration. The taxpayer may only address letters to the tax authority – however, the system does not allow letters to be served to an account in Your e-PIT or to the Tax Portal.

What is to change?

e-Tax Office, the implemented ICT system, will be an ultimate website providing a package of coherent and complementary online services intended for taxpayers, tax remitters, agents, court enforcement officers and notaries public. The system is to replace the previously existing Tax Portal and will be intended for comprehensive handling of issues remaining within the competence of National Revenue Administration bodies.

Through the e-Tax Office, it will be possible, for instance, to file letters (including requests, declarations and powers of attorney), receive letters delivered by the National Revenue Administration authorities and make online payments for taxes, levies and non-tax budgetary dues.

As a rule, the use of an account in the e-Tax Office will be voluntary.

Accounts in the e-Tax Office will be created for the following categories of entities:

Types of issues handled automatically in the e-Tax Office

The passed law also provides for the possibility of handling certain matters in the e-Tax Office by means of automatically generated letters.

According to the draft Regulation presented by the Council of Ministers, right now two types of issued are envisaged to be handled in the e-Tax Office by means of automatically generated letters:

Other changes introduced by the Act

The Act provides for the possibility to send a notice of having committed a prohibited act (so-called voluntary disclosure /czynny żal/) via the e-Tax Office. However, the possibility to submit a voluntary disclosure will apply only to financial preparatory proceedings authorities operating within the e-Tax Office (heads of tax offices) and not to other law enforcement authorities (e.g. heads of customs and tax offices).

The certificate on having no tax arrears will not contain information about proceedings conducted against the applicant in cases of fiscal offences or minor fiscal offences.

Under the new regulations, the Minister of Finance will be able to extend deadlines provided for in the tax law (e.g. for filing a tax return) not only for groups of taxpayers but also for tax remitters, tax collectors and legal successors.

Overpayments will be refunded to taxpayers without an address of residence in the territory of the Republic of Poland only to the bank account indicated by the taxpayer, in accordance with the provisions on reporting bank accounts for refunds of overpayments (in annual returns or in the update declaration of an individual being a taxpayer – ZAP-3). The bank account the refund of the tax overpayment will be made to may be either a domestic or a foreign account.

When will the changes enter into force?

The Act enters into force on 7 July 2022 (with the exception of certain provisions to become effective at a later date).

At the same time, the exact date of the actual launch of services related to the e-Tax Office system, as well as the date of discontinuation of services available on the Tax Portal, will be announced by the Minister of Finance by virtue of a notice.

or your advisor at MDDP.

E-mailLinkedin
MORE KNOWLEDGE
Tweets by MDDP_Polska
Do you need a consultation?
Go to Top